In case you didn't know, we're expecting a baby! I've created a blog in light of this momentous occassion coming soon (well, in early November). I tried to link it on the side but it was taking too long. For now, you can check out: www.babycolviniscoming.blogspot.com if you want just thoughts on pregnancy and the arrival of the baby. If that doesn't interest you, no worries... I've spared you the baby talk! If it does interest you, however, check it out...

I've posted one photo on it so far... a belly shot. No, I'm not really showing yet... the baby is only the size of a blueberry! Mark thinks it's just my belly fat. Well, we can pretend, can't we?

In other news, we spent Easter weekend in Torquay, a surf town just south of us at the beginning of the Great Ocean Road. We stayed in a less-than-nice (but cheap and available last minute) cabin at D'Oro Tourist Farm, and watched the Rip Curl Surf Pro during the day. 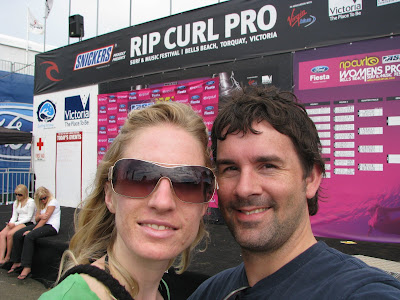 We watched a number of heats. Below are some shots from the women's competition. 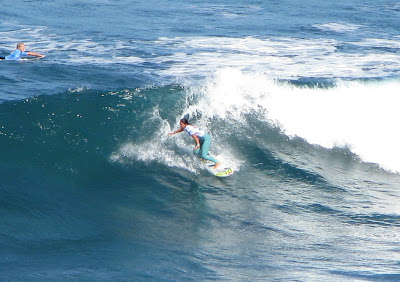 Megan Abubo, an American competing against... 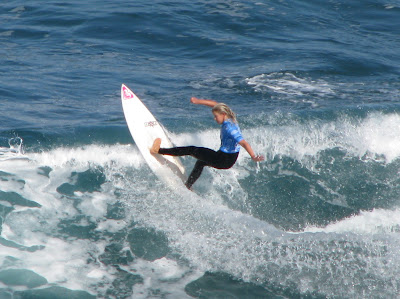 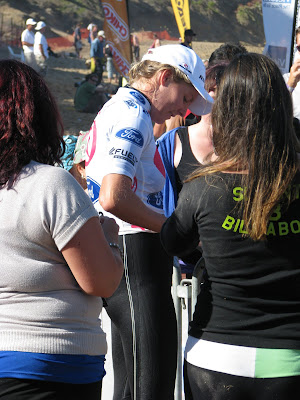 Steph Gilmore ended up winning this competition in the finals two days later. Here she is signing autographs. 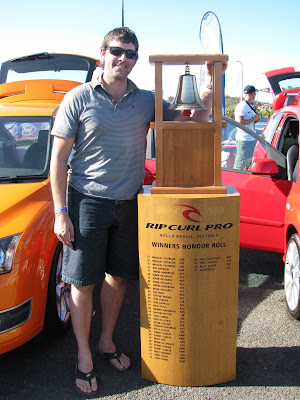 The winner get to ring this very bell. 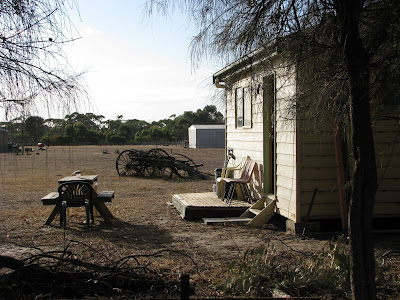 That cabin I was telling you about... 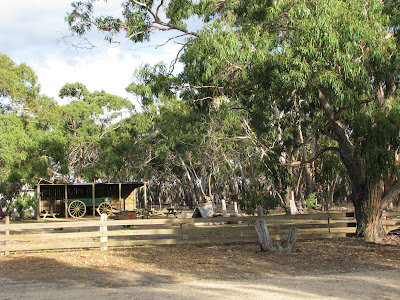 The view across from our cabin. 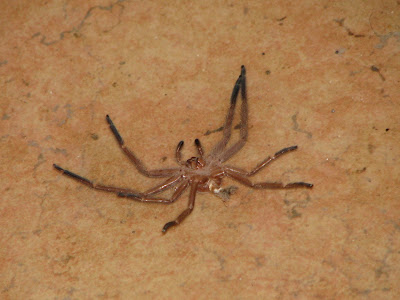 A dead spider I found in the bathrooms at the Rip Curl Surf Pro. Not dissimilar to the two ALIVE spiders I found in the very tiny shower compartment at our cabin. Yah, I freaked. I just don't know if they jump here yet! Luckily the big, scary looking ones aren't AS deadly. 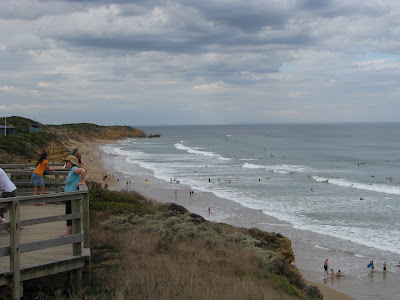 Mark went surfing a couple times this weekend as well. The beach was gorgeous, called 'Jan Juc.' I thought I had my eye on him the whole time. I kept waving at him, he kept waving at me... but when I went to snap a photo of him riding a wave, I realized... 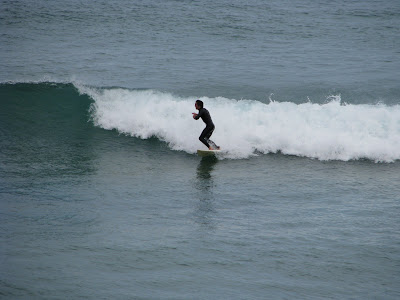 It wasn't him. Mark was wearing a short-legged wet suit. So what's this guy doing waving at me??!
Posted by dr riptide at 3:21 am

As promised, photos from our latest camping trip to Wilson's Promontory. 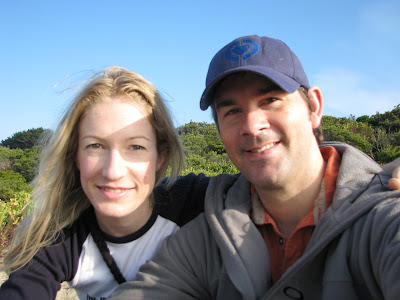 We are so blessed to have friends who lend us their cars. We were able to get away to God's beautiful nature for the 3-day Labour Day weekend. Our campsite was right next to the beach (see below). We simply walked out of our campsite, took a few steps down a sandy path and... 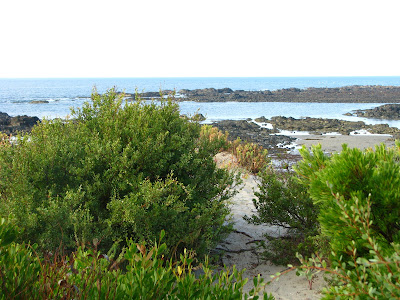 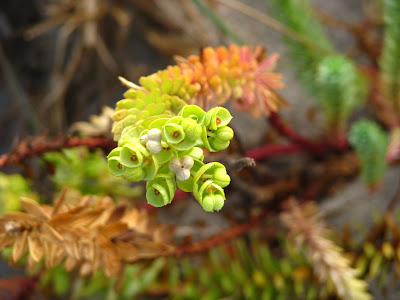 We went hiking (see below), snorkelling, and spent time at the beach. 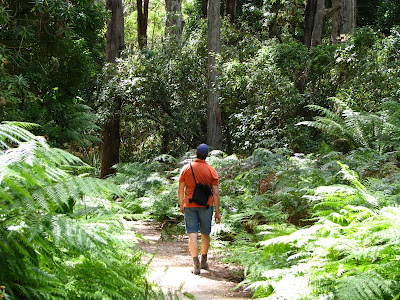 The view from the top of the mountain on our hike. 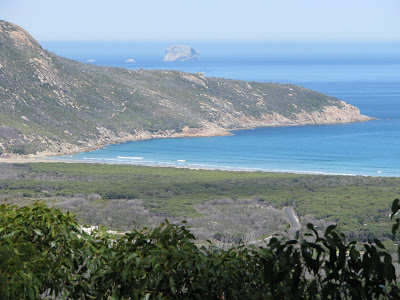 Squeeky Beach. The sand actually does squeek. It is white and fine like talcolm powder. It was SO soft. When you scuff your foot, it squeeks! This beach was crawling with internationals. 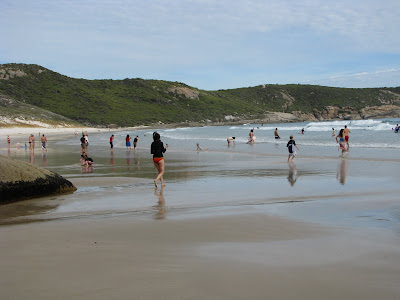 A little catch up...

Yes, this is Bella. Her latest obsession is the outside world! She LONGS to go outside and play and explore, but the vet has said she shouldn't go outside until she has been 'fixed.' Poor Bella. Here she is clinging onto the screen in our bedroom, although she has been known to crawl up our entire 6ft tall screen door in the front. She is still absolutely adorable and so very affectionate. We continue to enjoy her company. 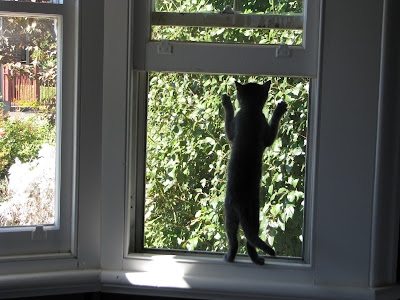 We love having visitors! Our latest ones were Murray Hone and his girlfriend Sarah. They are both Canadians. Mark knew Murray from Green Bay, a Christian camp they worked at for many years together during University. Murray came out for an Australian adventure and was working at a youth hostel in Sydney for a few months before Sarah came out and joined him. 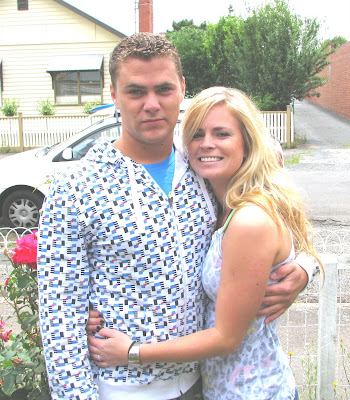 And finally, I love putting things in perspective... this is the road I bike every day, twice a day, on my way to and from work. I find it peaceful and refreshing. In the last few weeks since I took this photo, the leaves have begun to fall! Autumn is here. I'm still enjoying biking everywhere. It takes Mark and I only 10 minutes each one-way to get to our workplaces. Not bad. 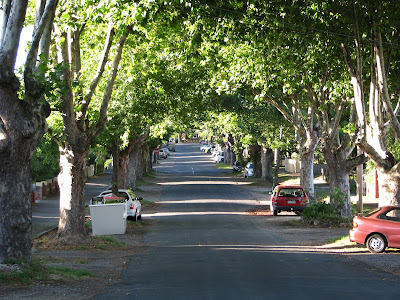 This past weekend was a 3-day weekend, out Labour Day. Mark and I seized the opportunity and went camping in Wilson's Promontory, a National Park on a peninsula east of Melbourne. We camped next to the beach and drifted to sleep listening to the waves crash (one of my favourite things!). Over the weekend we went hiking, snorkeling, layed on the beach, sat around a campfire, cuddled in the dark and observed an amazing sky full of stars and shooting stars and just had a nice time together. Photos of this to come in the next blog!

Mark's job is still going very well, thanks for all of your prayers. He has picked up the new technique and is becoming an expert in no time. He is pleased with all of the excellent results he receives from it, and his boss is happy with him!

I had an interview last week for Starbuck's Assistant Manager position. The interview was OK overall, but when I think back on it I really gave some abstract and goofy answers in my attempt to be honest and quick in answering. Oh well. I'll find out soon if I get a second interview. The twist in this scenario is that a school I submitted my resume to a few months back recently gave me call. The principal said he was interested in meeting me. The school is a Christian K-12 school. When I was speaking with the principal in our meeting, he told me that my name just kept coming to his mind and that he had to meet me. He seemed to be a man led by the Spirit, and it was suprisingly great talking to him. We had a good conversation, and I was excited to learn about how he is a man of vision and has great vision for his school. He wants me to join. Now, he couldn't offer me a set job or contract, mostly because I'm not qualified to teach in Australia, but he did offer me the opportunity to Relief (Substitute) Teach and act as an Art Consultant with the Art Teachers and Yr 11 & 12 students (he is hoping to utilize my worldwide art experiences to enrich their art department). So, your prayers would be appreciated for me!

That's all for now. More to come soon!
Posted by dr riptide at 8:52 am